gEdit is a serious text editor in the tradition of many editors that the programmer or code jockey will appreciate – syntax highlighting in many source codes, script formats, markup formats, and even some Scientific formats.

I write a lot of HTML code and I find the multiple undo/redo, find, search & replace, and the built-in code-aware spelling checker essential on a daily basis.

But that’s me. I’m writing about what I use on a daily basis and gEdit is always open on my PC of the moment. I do HTML coding for my personal website, keep lists of “To-Do” items, use it as a scratch pad to paste whatever nuggets of wisdom I find on the Internet and generally use it for quickly jotting down whatever I need to note.

In this day of sophisticated Word Processors and Publishers,
why would a text editor be still be needed?

Things don’t always go exactly as you planned. LibreOffice, which I’m writing this on, has a “save as HTML” feature,. Which I did (save as HTML) to demonstrate what gEdit is useful for.

This is what it looked like. Word Processors aren’t perfect 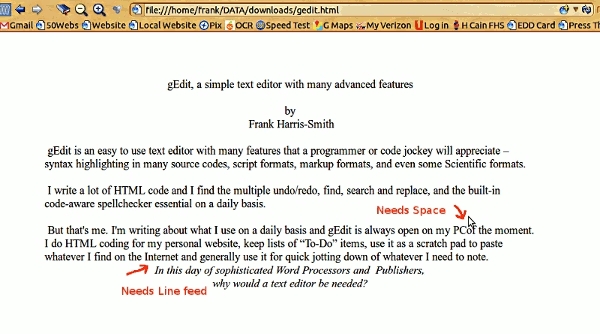 Editing the HTML code in gEdit

Notice the syntax highlighting which for any kind of coding is essential?

Here’s what my quick editing looks like, 11 keystrokes and two clicks 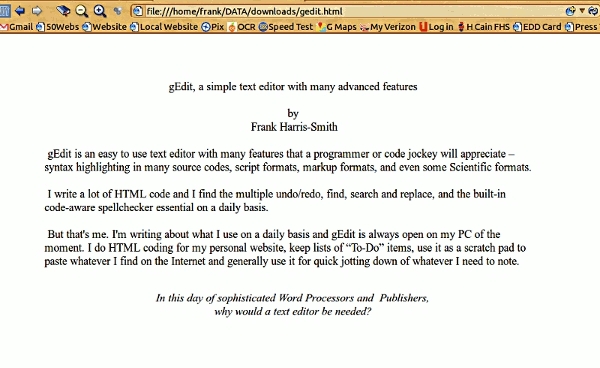 There are many plugins for gEdit that add new functions. The Tag List is one I use frequently to look up character and tag codes.The spelling checker is especially valuable. I’m hardly perfect in either my spelling or typing.

Here is the Plugins Tab in the gEdit Preferences

There are many programming specific plugins including a bottom pane embedded bash terminal. All Linux programmers can use a convenient terminal that you can cut & paste to and from.

Pressing “F9” will open this side pane with your Tag List 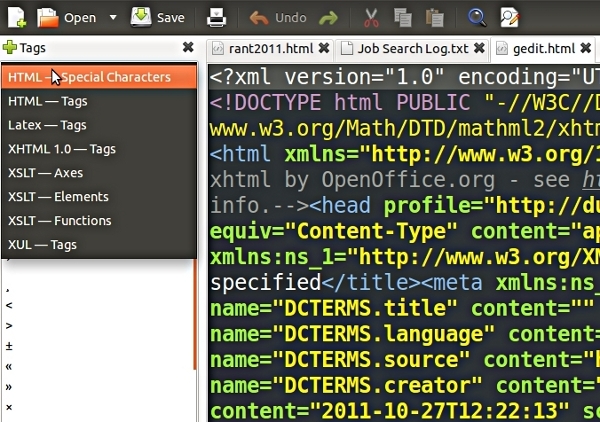 And here’s the bash terminal plugin:

The editor has 5 different color schemes, the one in the example above is “Oblivion”.


Two more useful programmer plugins are the code comment and the session saver.

Commenting code is essential if you ever expect someone else to understand your code. Or even yourself if some time has passed and you can’t quite figure out what you did. What was I thinking way back in 1998?

To add a comment to your code type the text, highlight it, and then type [CTRL] m or [CTRL][Shift] m to remove the commenting.

The session saver is really nice when doing a project involving multiple files being edited. You can save your session when you need to stop for a time and when you restore the session, all your opened files all get opened in the exact same tab order as you saved them.

I recently upgraded my laptop to Ubuntu 11.10 because I was running two different Word Processors, LibreOffice on my desktop system and OpenOffice on my laptop. They are almost identical but not completely. LO wanted to do bullets one way but OO had a completely different idea.

However, before I upgraded I ran a LiveCD of Ubuntu 11.10 to see if it was what I wanted. One of the first things I checked – did the Distro include gEdit? A gEdit-less Distro would have been a deal breaker for me.

Gedit is officially known as the “Gnome text editor” but there are Windows and Macintosh ports of gEdit. You can even find it as part of non-Gnome Distros like Ubuntu 11.10 Unity or you can find it in many Distro Software repository.

In 2006 when I was running my first laptop on Xubuntu (XFCE + Ubuntu) I installed gEdit because I need a serious text editor, not “mousepad”. gEdit worked in Xunbuntu and I’ve been using it since I first started playing with Linux 6 years ago.

You can get more information at gEdit Gnome Project Page

14 Responses to “gEdit, an easy to use text editor with many advanced features”