Do you want to play a game with extreme violence in a background populated with characters that are American Caricatures ?
Welcome to Postal 2.

The game is not new (first released in 2003) but has been recently released on Desura, a thing that make it really easy to be installed on our Linux box.

Postal 2 (stylized as Postal²) is a first-person shooter video game by Running with Scissors, and it is the sequel to the 1997 game Postal. Both are intentionally highly controversial due to high levels of violence and stereotyping. Unlike its predecessor, Postal 2 is played completely in first-person based on the Unreal Engine.

Let’s see some characteristic of this game.

Postal 2 tells the typical week of a “postal dude”, who day after day has to earn a living doing his jobs. Pushed around by a woman who never appears in the game, our “metropolitan hero” needs to complete a really long list of standard duty, such as buying milk, return books to the library, pay checks, collecting signatures for a petition; and other normal things.

To complicate his life he begin in a environment hostile almost at 100%. Our man don’t has an home (he lives in a trailer), and recently moved into an ugly suburban town called “Paradise”. It ‘s logical that in a provincial town, lost in the desert, the stranger is not seen with a good eye. A “pressing” psychological situation that could broke everyone. Fortunately, in the case of the game, it’s up to us to decide how to live our digital alter ego. Rebellion at 100%? Diligence absolute? His life is in our hands and as it says in large letters in the box of the game: “… it’s only as violent as you are”. 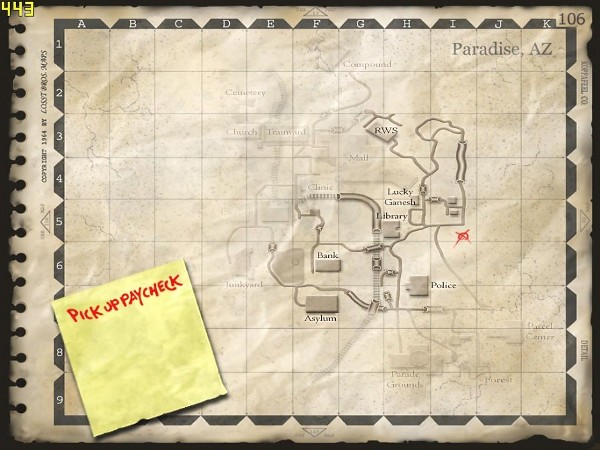 One of the major concepts of Postal 2 is that it is meant to be a “living world”, a simulation of a tongue-in-cheek off-kilter town. Game characters live out their lives completely separate from the actions of our character; walking around town, buying and selling merchandise, and even engaging in random shootouts with each other and the police.

So theoretically we could move “peacefully” in the city and do our daily tasks diligently.

The choice, however, will soon be made​​, despite the programmers are working hard to put the blame on the supposed freedom of action: there are, in fact, predetermined events that will lead us inevitably to resort to violence and we will transform us in short-term ruthless killers.

While difficult, it is possible for the player to complete the game without resorting to violence or having to kill anyone; although in this case, the player will have to resort to using cunning tactics to survive—including a greater temptation to steal and take drugs. Some missions put Dude into extremely hostile environments where we will be tempted to kill the people attacking us in order to survive, and at these moments the player will have to make a choice whether to fight or to flee. The attackers include book protesters who set the local library on fire and then attempt to murder everyone trapped inside, a band of armed robbers, and violent video game protesters who ironically begin brandishing weapons and opening fire on the Dude and the Running With Scissors (the company which makes the Postal series) staff without provocation. 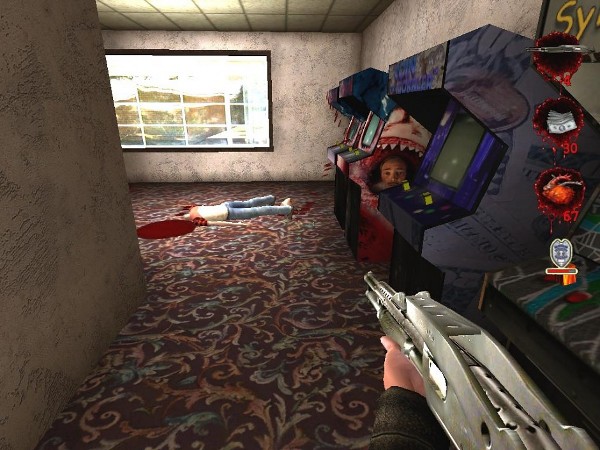 During the week of play (each day represents a level), we’ll move from one part of the city to the other, through a number of tunnels (which work as loading areas) and we should explore as much as possible every area, finding weapons of all type (from simple showel to shotgun armed with napalm) and special items, useful to complete the various tasks. If (as likely) decide to act outside the law, we will have to reckon with the police that will try to arrest us in every way and in the advancing of the week, the town of Paradise will become increasingly confusing, until you reach an apocalyptic Friday.

The backgrounds of the various levels were entirely hand-painted with brushes, then scanned and adapted to the game.

The game features a cameo by Gary Coleman, acting as himself, who appears early on as the objective of one of the game’s tasks (travel to the local shopping mall to get Gary’s autograph).

The game costs around $ 10 on Desura, in my opinion is a good buy for the particularities of this game, certainly not a good gift for a child, but can be fun if taken for what is it, a video game that brings into play many stereotypes of the modern life.