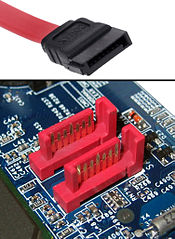 SATA is the most common bus interface on desktops and on many servers, so it’s important that you know some basic concepts about it, from the always informative Wikipedia:

Revisions
Revision 1.0a was released on January 7, 2003. First-generation SATA interfaces, now known as SATA 1.5 Gbit/s, communicate at a rate of 1.5 Gbit/s, and do not support Native Command Queuing (NCQ).

Second generation SATA interfaces run with a native transfer rate of 3.0 Gbit/s, and taking 8b/10b encoding into account, the maximum uncoded transfer rate is 2.4 Gbit/s (300 MB/s). The theoretical burst throughput of SATA 3.0 Gbit/s is double that of SATA revision 1.0.

Serial ATA International Organization presented the draft specification of SATA 6 Gbit/s physical layer in July 2008 and ratified its physical layer specification on August 18, 2008. The full 3.0 standard was released on May 27, 2009. It runs with a native transfer rate of 6.0 Gbit/s, and taking 8b/10b encoding into account, the maximum uncoded transfer rate is 4.8 Gbit/s (600 MB/s).

In short they are usually referred as:

So which revision are you using on your computer ?

It’s really easy with Linux terminal to find the speed that you are really using on your devices, you just need to issue the command:

Or if you want to see just the connected devices

So from my output I can see that I’ve 4 SATA devices connected and ready (link up), 3 of these devices have a speed of 3.0 Gbps and 1 of them has a speed of 1.5 Gbps.
Now, I know my hardware and I think that the 3 devices at 3.0 Gbps are my 3 hard disks and the latter is my CD/DVD writer, but how can I verify this ?

Stackexchange has a nice and quick solution:

The /dev/sdY devices are created in the same order as the ataX identifiers are enumerated in the kern.log while ignoring non-disk devices (ATAPI) and not-connected links.

The output for me is:

I am using /var/log/kern.log and not /var/log/kern.log.0 because on my desktop the boot messages are not already rotated.
I grep for Apr 3 because this was the last boot time and I want to ignore previous messages, if you use this script just change the date to the one of your last boot.

So this confirm my idea, the 3 devices at 3.0 Gbps are my 3 hard-disks.
But now I’ve one more question, is this the max speed of my hard disk or it’s the motherboard that is limiting them ?


To verify this I’ll use another great command hdparm.
hdparm provides a command line interface to various kernel interfaces supported by the Linux SATA/PATA/SAS “libata” subsystem and the older IDE driver subsystem.
To get the information that we are searching you can simply use the flag -I but this gives really a lot of information so I suggest to use the following command to get just the information about the speed:

Interesting my first disk can use the SATA Revision 3, so my MotherBoard is limiting this Harddisk.

The second and third hard disk are older (I use them in Raid 10) so I’m not surprised that they only support Sata Revision 2, and anyway with this MB it’s not so important.

So as you have seen in this article on the GNU/Linux terminal you can quickly discover what’s the speed of your devices, map the ATA devices to your SD hard disks and verify the real speed of the hard disks.