On server it’s useful to monitor, and collect, data about the use of your bandwidth, in the past I’ve wrote an article about “Monitor your bandwidth from the Linux shell” and I’ve also presented 4 useful tools that you can use to have a real time monitoring of the bandwidth:

IPTState : This software is a top-like interface to your netfilter connection-tracking table. Using iptstate you interactively watch where traffic crossing your netfilter/iptables firewall is going, sort by various criteria, limit the view by various criteria. But it doesn’t stop there: as of version 2.2.0 you can even delete states from the table!

pktstat displays a real-time list of active connections seen on a network interface, and how much bandwidth is being used. Partially decodes HTTP and FTP protocols to show what filename is being transferred. X11 application names are also shown.

NetHogs is a small ‘net top’ tool. Instead of breaking the traffic down per protocol or per subnet, like most tools do, it groups bandwidth by process. NetHogs does not rely on a special kernel module to be loaded. If there’s suddenly a lot of network traffic, you can fire up NetHogs and immediately see which PID is causing this. This makes it easy to indentify programs that have gone wild and are suddenly taking up your bandwidth.

They are all good I suggest to read my old articles to have a small introduction about them, today I want to show you vnstat, this small program has something more than the others, it can show real time statistics, but the feature that this small program shines it’s its ability to collect data over a long period of time.

vnStat is a console-based network traffic monitor for Linux and BSD that keeps a log of network traffic for the selected interface(s). It uses the network interface statistics provided by the kernel as information source. This means that vnStat won’t actually be sniffing any traffic and also ensures light use of system resources. In Linux at least a 2.2 series kernel is required, that should means that everyone should be able to use this small program.

The program is open source/GPL and can be used either as root or as a single user.

I’ve done my tests on a Debian server, for this distribution you can install the package available from the main repository simply with the command (as root):

A package for this software should be present in all the repository of the main distributions, so you can probably install it with your package manager (pacman, yaourt, emerge, yum).

During the first run you have to introduce every interface that needs to be logged to vnStat. For example for a wired interface you have to use the command:

Or a wireless interface:

When introducing an interface for the first time there will be an error message saying ‘unable to read database’. If this message is followed by an info message saying ‘a new database has been created’ the interface is successfully introduced. If this is not the case check that the specified interface is valid.

Note: I’ve tested this also on Ubuntu and at the end of the installation of vnstat I’ve got the message:

So if you see something like that you can skip the initialization of the interfaces and setting up an updating method.

After introducing the interface(s) set one of the update methods.
Warning: Only use one of the methods, do not use them at the same time!

Cron
The first method is using Cron.Create /etc/cron.d/vnstat with the contents:

This assumes vnStat is installed in /usr/ and also assumes that /etc/cron.d is a location for system-run cron jobs (which is the default for most Linux distributions).

Service
The second way is using vnstatd a program that collect all the information and that is run as daemon, on debian you can start it with

If you use systemd you have to run the command:

The basic syntax it’s vnstat -i interfacename, on a system where you have just installed it, you should see something like this:

Not so interesting perhaps ?
Well, when you have vnstat running for some time you get a LOT more information

As you can see you have a small report that shows the total usage of bandwidth in real time (the first block) of this month and the previous, and the total bandwidth usage of today and yesterday, this is much more interesting for sure.

With the -h option you can get an hourly report of the last 24H.

Or if you just want to see the live stats you can use the -l option, statistics will be shown after interruption if the runtime was more than 10 seconds.

In the latest releases it’s present a new option to generate images.

You make the images with the command vnstati. From the link:

The purpose of vnstati is to provide image output support for statistics collected using vnstat. The image file format is limited to png. All basic outputs of vnStat are supported excluding live traffic features. The image can be outputted either to a file or to standard output.

Output traffic summary with hourly data under the normal summary for a merge of interfaces eth0, eth1 and eth2 to file /tmp/vnstat.png.

This is an example of the images this command will produce: 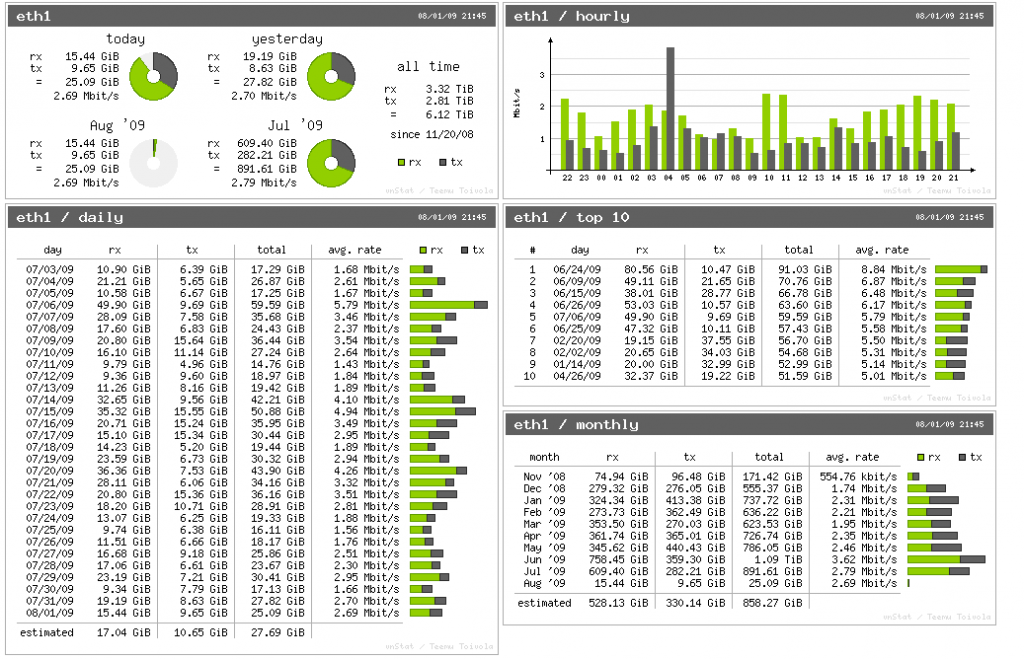 Or as alternative you can use a php frontend: vnstat PHP frontend, the script requires a working PHP setup with GD image libraries. Also vnStat must be properly installed and collecting data. 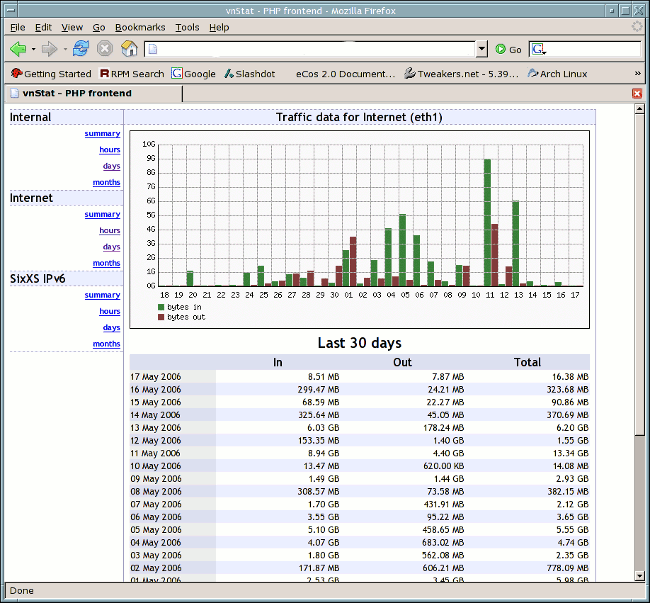 3 Responses to “Monitor your Bandwidth on Linux with vnstat”