In a former article regarding Linux games a reader commented that for Linux there are always the same title and nothing new really comes out.
So i’ve decided to explore a bit the indie game market and make 2 post about them, in this one i’ll show you 5 freely downloadable Indie games, in the next one i’ll post 5 game that must be purchased (but the costs are relatively low).

I think that this is how the Console and Windows player imagine every Linux Game : A Classical Ascii art graphic, with a lot key combinations and options, a nightmare for most gamer. But this game don’t comes out from the 80’s it’s actively developed, Version 0.31.25 it’s been released on Mar 28, 2011, and has a community of players that follow this game and like it’s features.

Prior to play, a world must be generated using the software or downloaded from the Internet. Each constructed world is unique; events that take place during play will affect subsequent games in the same world. World creation in Dwarf Fortress is elaborate: terrain is generated using fractals, erosion is simulated, then wildlife, towns, and other sites are placed

There are 2 main modes available in this game: Dwarf Fortress mode and Adventurer mode

As the player begins “Dwarf Fortress” mode, they have the ability to select a starting location, which determines the resources and challenges one may encounter on a given map. For example, a player may start on a map that contains a magma pool, which allows the dwarves to smelt and craft metals without requiring fuel resources but occasionally spawns dangerous enemies.

The initial settlement party consists of seven dwarves. The player receives a number of points to spend on settler skills and resources (food, weapons, armor, equipment, etc.). Once these decisions have been made, the settlers arrive and await the player’s instructions. The player can also choose to use a pre-generated party of dwarfs.

In “Adventurer mode”, the player controls an individual dwarf, human, or elf. There is no goal apart from survival, making this mode more casual than the previous. Players may either receive quests to kill monsters, which provide no specific reward, or wander freely and slaughter local fauna. “Fortress mode” had received the bulk of the developer’s attention until update v0.31.17. With that, however, “Adventure mode” has been vastly improved in an effort to prepare it for a more seamless integration with Fortress mode. It is now possible to aim at specific body parts, which makes combat much more interesting; become a revered hero with the various nations in the world; visit castles with lots of hireable soldiers and fight fearsome “night creatures” and menacing outlaw bands.

In this screenshot the dwarves have carved out a little fortress to live in. The river at this embark location gave us a steep grade to work with. Living quarters are at the top left, furnished with objects created in the workshops at the bottom of the image. The food stockpile is at the top center (food barrels and seed bags filled with the provisions we brought along). Stone is stockpiled at the bottom left.

Epic Inventor a free-to-play RPG/RTS platformer that allows you to build your own cities, NPCs, turrets, robots, etc. by mining gathering resources.
The game is inspired by Terrania but with its own new additions and features.

As you proceed through the game though, Epic Inventor becomes less like a Terraria clone and more like a platforming RTS. You see the developers were not only inspired by Terraria, they were also hugely inspired by Age of Empires.

So, for example, at a certain point you’re not just making items, or ordinary buildings, you’re making integral resource structures like a Lumber Mill which will generate wood for you at a steady rate. This wood would then power your city and your citizens or NPCs which will play a big role in the game.

This is a re-make of a 1997 game for Amiga, in this game it is the unimaginably distant year 2009. You are Nick Vrenna, falsely locked inside a high security prison. The genetic experiments conducted in the prison, combined with a full-scale riot that took place recently, caused all guards and inmates to be transformed into insane, aggressive mutants.

You find yourself immune to the rage, pick up some armor and weapons and start to find an exit out. There are plenty of alien-like creatures standing between you and the ultimate freedom – this won’t be a breeze.

Abuse revolutionized platform gameplay controls by dividing it into 2 seperate parts. One for aiming, using the mouse, and the movement direction of the body using the keyboard. The result is an incredibly smooth experience that one has come to expect today – much thanks to this title that was developed in 1995 by Crack Dot Com. 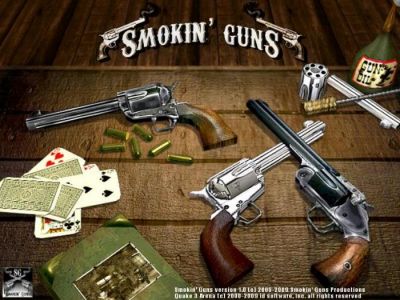 Smokin’ Guns is intended to be a semi-realistic simulation of the “Old West’s” great atmosphere & was developed on Id Software’s Quake III Arena Engine.
This total conversion includes completely new weapons created with historically correct information about damage, rate of fire, reload time, etc. It also includes new gametypes and maps inspired mostly by movies. And to increase the feeling of a “gunslingers atmosphere” we also created music tracks and sounds adapted to this time period.

Here’s a list of some of the most important features of Smokin’ Guns:

Xonotic is an open-source first-person shooter video game. It was developed as a fork of Nexuiz, following controversy surrounding on the game’s development. Currently, the game is running on a heavily modified version of the Quake engine known as “DarkPlaces”. Gameplay is inspired by Unreal Tournament and Quake, but with various unique elements.

The software, once started, displays a very user-friendly graphical interface: three large icons will fill your video: one for the single player campaign or to start singles matches against bots, the other for the multiplayer and the last for setup the game to better taking into account the configuration of your PC. The game, although it is only at version 0.5, offers many different game modes, a large number of maps dedicated to them and in the future there should be also the possibility of using different vehicles in the game.