More and more games are published for Linux and so it’s becoming more important to have a good performance with our beloved system, but some of the Desktop Environemnts can really slow down your gaming experience.

There is an interesting report about this on Phoronix in the article: Gaming/Graphics Performance On Unity, GNOME, KDE, Xfce, and these are their conclusions:

Overall the results were interesting from the range of Linux OpenGL benchmarks conducted under Unity, Unity 2D, GNOME Shell, GNOME Classic, KDE Plasma, and Xfce on Ubuntu 12.04. There are some exceptions, but across the driver configurations the desktops to commonly perform the best were Xfce 4.8 and GNOME Shell 3.2.2.1. The default Unity desktop was a mix in terms of performance across the different OpenGL workloads.

So there are good chance that you can speed up your graphics performance, how ?
Use Fsgamer 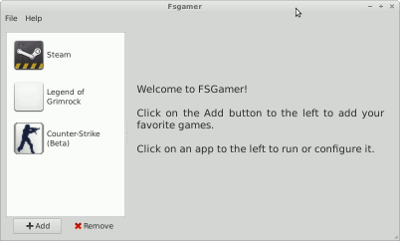 The description of the software tells that FSGamer runs games in their own X server, which can improve the speed, reduce annoying interruptions, and make switching between fullscreen games and your desktop easy and reliable.

But it gives also a warning

This is alpha quality software. It is also very sloppily written, and may crash everything and make you cry. So save your work!

so take care when using this software.

The basic concept behind this is nothing new: It starts a new X server, load Openbox as desktop Environment and then launch the game inside this environment, starting a new X server means that you’ll be able to switch back and forth your orginal system with ctrl+alt+f7 and ctrl+alt+f8, on my MINT 12.10 I’ve my XFCE desktop on ctrl+alt+f8 and the new X windows available on ctrl+alt+f7

At the moment of the writing the most recent package is the 0.1.1 and there is no repository that can be used, I’ve used the official debian package but before installing it I’ve manually added the dependencies with

And once downloaded the .deb package in /tmp I’ve installed it with

In Ubuntu and Mint the standard user cannot start a new X server so you have to allow FSGamer to start an extra X server, as first thing do a backup copy of the relevant configuration file and then edit it with:

And Allow audio to work in the new X server:

Now you have to restart your X server completely, you can try to logout from your active session and login again, but if this don’t works just reboot your desktop.

Launch the FSGamer application from the terminal with command fsgameror from the system menu and select the games that you wish to import.
The application acts as a launcher for each game that you have choose, you just have to select it and click on a big green arrow.
The application has also the ability to run custom commands before the game itself or the initialization of the new X server.

At the moment on my Mint the graphical interface is not working, I’ve imported steam as application but when i click the green arrow I get:

This is a know open bug, so hopefully in the next release this will be fixed but this also means that for the moment to run steam I’ve to use this command:

This works fine, and I can run any program just changing the –exec option so I could run

But, if you run the software without the –desktop, to stop Fsgamer you have to kill it in some way, in theory there is the command

But this don’t works as well for me, so I used a classic killall fsgamer

3 Responses to “FSgamer, a software to improve Game performance under Linux”