It seem impossible for me to get rid of all the windows server that our company still has, some have custom software made years ago that no one want to touch, other have management console for Vmware or Cisco appliance..that run only on Windows or again some product relesed their software only for windows, so in short i still have to login sometime on a Windows server from my PC with Linux, so what’s the best way to do this ?

The best protocol to do this is RDP. Remote Desktop Protocol (RDP) is a proprietary protocol developed by Microsoft, which provides a user with a graphical interface to another computer. Clients exist for most versions of Microsoft Windows (including Windows Mobile), Linux, Unix, Mac OS X, Android, and other modern operating systems. By default the server listens on TCP port 3389

But now back on Linux, let’s take a look at rdesktop, TSClient, Remmina e PAC

Naturally to use it you need a graphical environment, available for Linux with the Xorg implementation. Then you must install the rdesktop package and its dependencies, if necessary, this package is very popular so you should have no problems installing it on your distribution with the usual package managers (yum, aptitude, emerge)

To use it you do not need any configuration, just run from the command line:

But rdesktop can be used with many options, so for example you can use it with something like this:

The options used in the above command are:
-d domain
-u user name
-p password
-k keyboard type stating english us
-a color depth set as 16
-z compress the RDP datastream
-g graphical resolution of 1024×768
-5 to tell it RDPv5
-P for persistent bitmap caching

Full screen mode can be turned on by typing at a command prompt: rdesktop -f server_address
To toggle between full screen and windowed mode, use the key combination: Ctrl+Alt+Enter.
There are many more options available. After you install rdesktop – use “man” to view more.

Tsclient (Terminal Server Client) is a frontend for rdesktop and other remote desktop tools, which allow remotely controlling one computer from another. It is a GTK application. Notable visual options include color depth, screen size, and motion blocking.

You can also save profile of your windows servers, so i find this front-end to rdesktop really useful to set up all parameters once and use them forever.

Features include: a GNOME panel applet to quickly launch saved profiles, sound support, similar look and functionality to the Microsoft client and compatibility with its file format, interface translated into more than 20 languages, and support for rdesktop 1.3, Xnest and VNC clients.

Remmina is a remote desktop client written in GTK+, aiming to be useful for system administrators and travellers, who need to work with lots of remote computers in front of either large monitors or tiny netbooks. Remmina supports multiple network protocols in an integrated and consistant user interface. Currently RDP, VNC, NX, XDMCP and SSH are supported. 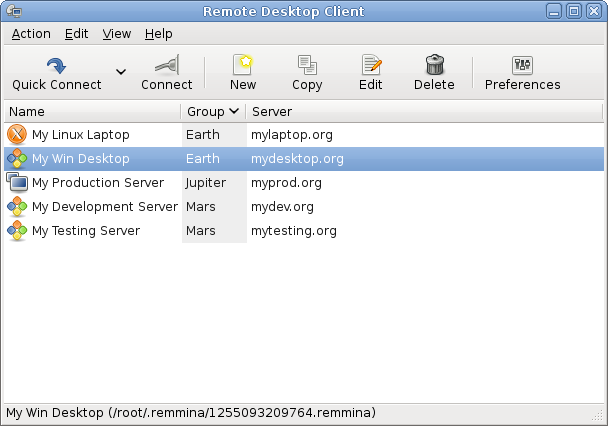 What i like in remmina are 2 things, the interface is really simple and don’t has fancy menu or options it goes straight to the point and you can easily configure different type of connections and the second i like is the support at multiple protocols, so you could just use 1 client to connect via SSH, RDP and NX at your servers.

I’ve recently wrote an article about PAC, so i’ll keep this short, PAC is the software with the more protocols i’ve found at the moment, so it could really be your only client !.

Some of the protocols are ssh, telnet, sftp, rdesktop, vnc, cu, remote-tty and ftp, and another feature of this software is that you can set macro to be run just before or after a connection or set EXPECT commands to be run interactively in the remote connection.