Garry’s mod is one of the most sold games for Linux on Steam, so I’ve decided to publish this review of the game, first published on devtome.com

Garry’s Mod, developed by Facepunch is without a doubt one of the most enjoyable and hilarious games that I have ever played. Out of the box, the game is perhaps one of the ultimate sandbox games available anywhere. You spawn in the middle of an open area that you choose and you can spawn in just about any item or NPC that you can think of. This game is also probably one of the best physics simulators available. The entire game revolves around physics. In this game you are able to do whatever you heart desires and although I say that with a lot of different games, I truly mean it with Garry’s Mod. Whatever you want. If you want to build an airplane out of a bathtub and some planks of wood, then be my guest. You can simply spawn in the materials that you want and then use tools to “weld” them together. Using weight tools you can make these items very light, which will allow them to become airborne. This game definitely deserves lots of praise.

OUT OF THE BOX FEATURES

Garry’s Mod out of the box features a few very open sandbox oriented maps. There really are no tutorials for this game. Occasionally while playing and when you first start up the game, you will have multiple blips pop up in front of your character telling you how to access the menu of items and how to use a few of the items. However, these little tips do not go very in depth at all and most of the parts of the game, you must discover on your own. I promise you that this is not very difficult but if you are having a hard time figuring out how to do something within the game, you could always just go and take a look at one of the very many YouTube and other written tutorials that you can find on the Internet.

Out of the box, the game features lots of items from the game Half-Life 2. Most of the NPCs available to the player out of the box are from Half Life 2 as well or from other very popular Valve games. In the spawn menu, you have weapons that you can give to you player as well. From this menu you can change the appearance of your character as well. Out of the box, you can make you character look like any of the available NPCs. If you are feeling a bit violent, you can just spawn in a bunch of the NPCs available in the spawn menu and open fire on all of them. Or you could create a structure or building of some sort and just blow it up using your rocket launcher. Maybe you’re feeling a bit adventurous and you feel like traveling around? Well you can also spawn in a few vehicles to ride around in not to mention you can always create a vehicle out of basically anything that you want with the different items and tools that are available to you. 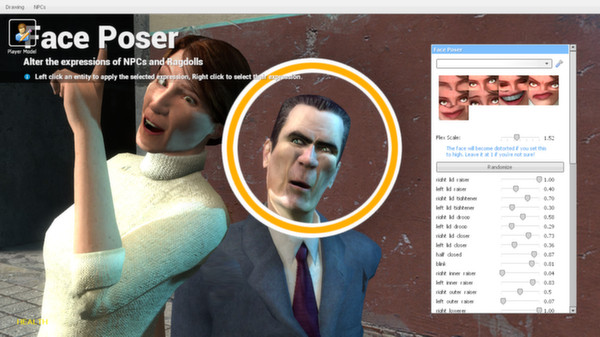 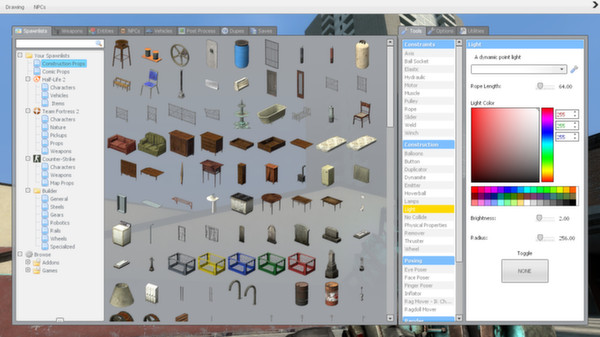 The add-ons available to Garry’s Mod are what make it as successful as it. The game is called Garry’s MOD for a reason. The community for this game is absolutely ridiculous and it is constantly creating more and more for this game. There is completely new game modes added to the game with some of these including prop-hunt and trouble in terrorist town, which might just be the one of the two most popular things being played by lots of You Tubers right now.

These add-ons also can add tons of new things for you to use when playing this game including new maps for the game. People have created some pretty crazy maps including Minecraft themed maps that include items like Nether portals that actually function like they would in the actual game. There are also maps of different places in the world or just places from different video games. For example, there is a map of Disney’s Tower Of Terror that actually functions just as the real attraction in Florida does. The creativity in this game is endless.

The amount of vehicles to travel in out of the box is very small. I believe there are only one or two. Through the modding community, you can download brand vehicles to travel around in. Some of these can include remakes of actual cars that are very realistic and also very cool to see put into a game like Garry’s Mod.

Along with these other add-ons players can download more weapons into the game. On my PC I currently have lots of different weapon mods installed. My favorite weapon mod is without a doubt is The Elder Scrolls: Skyrim weapons mod, which adds many of the weapons, featured in the game. It feels nice to run around slashing at random NPCs with a Daedric sword. Because you know, why not?

One more thing that can be added into the game as well as all of these other mods is more NPCs. You can download friendly and hostile NPCs that will attempt to attack and kill you. I currently have the Amnesia monsters installed on my PC and I love to kill them over and over again after having them scare the crap out of me in that game.

Overall the add-ons in this game are without a doubt the best part of this game and without them, I can’t see it being nearly as fun or successful. 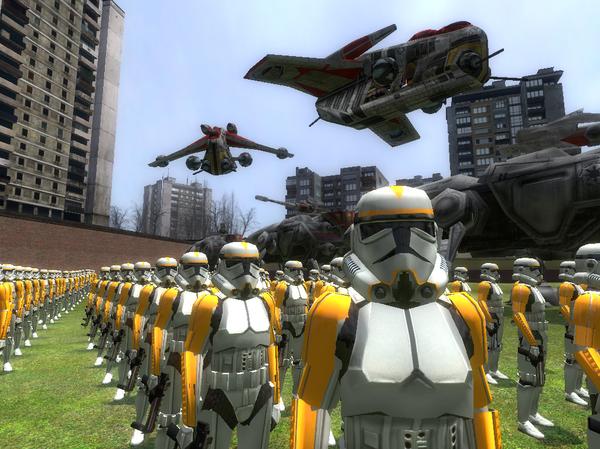 There really is not all that much to say about Garry’s Mod despite how much fun and how popular it is. It would seem to be one of those games that you have to play to see what it is actually like. I will tell you though; everyone that I know that has played it including myself has enjoyed this game quite a lot. Sadly to all the console gamers out there, the chance of a game like Garry’s Mod coming to consoles is very little chance of that happening. The game is currently available on Steam and Steam offers what is called the Steam Workshop where modders can put files up for download to use in games. Consoles like the Xbox and PlayStation do not have features like this and Microsoft and Sony do not like having their systems or games modded. The reason I think this is is because they do not want someone to release a malicious file into their infrastructure. There is almost zero possibility of these corporations allowing players to upload user created files to download.

To wrap it up, I would give Garry’s Mod a solid 8.5/10. It is very fun to play however, at points it can be a slight bit boring and also the games lack of instructions can make the game hard to play for some. There is so much to do with this game though that the possibilities are almost completely endless. I would highly recommend that you go and pick this game up as soon as possible. If you were a little low on money, it wouldn’t be a terrible idea to wait around for a while to see if the game goes on sale on Steam as it usually does whenever they have big sales.