Miro, a new application for Internet video has been designed to be an easy app that will give users an amazing full-screen show. With over thousands of free videos that can be viewed from the Internet, Miro gives the user the ability to download all the chosen videos they enjoy as soon as they are released.

Miro, first launched in 2005 then revamped in 2007 (it was first launched as Democracy Player), is written in Python. Miro has an embedded WebKit for Linux and(Mozilla Gecko/XUL until 3.0.2). With the updated version of 3.0, Miro offers GTK for new Windows and Linux systems.

Unlike some media sharing programs, Miro has a function that allows the user to preview shows and music, before downloading or making a final purchase. By having this special feature, Miro can save Internet browsers time, effort, and computer space.

Upon downloading, Miro sorts all music and videos by genre, popularity, age, language, and rating. A good tool for keeping files sorted without having to manual do all of the work.

When compared to YouTube, Miro is a video viewing God. Miro downloads the chosen video completely, meaning the videos won’t have to buffer (no more pauses, restarts, or waiting to view the video). Miro also has a toggle-able download setting, allowing the user to have Miro continually download an entire series as it is released without having to manual do the work themselves. Great for busy bodies who like to relax after a long days work.

Not only will Miro keep up with the users downloads, unlike some media players, Miro will automatically save where the user stopped. An amazing bonus for when the power dies, users won’t have to click and search for where they were cut off from, letting users avoid accidental movie spoilers.

Another great addition to Miro is the ability to leave the clunky iTunes behind in the dust. Miro allows the user to play any and all formats from YouTubes and Amazon, which allows the user to download while listening to music. The ability to convert most videos (all converts are mp4/h264 based) that are capable of to be synced with any device known to man (this includes the Apple devices, Android devices, and much more).

Unlike many other downloading sites, like Pirate Bay or LimeWire, Miro has a legal torrents for those who want to download without the fear of the FBI knocking on their door or having ones Cable company disconnect their Internet. A wonderful feature to keep their users out of trouble. 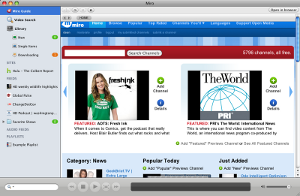 Miro is a great add-on for any Internet user who enjoys music and videos. Every Internet user deserves to have a good-looking media player that can also function without flaw. The added bonus of having extra features at every twist and turn is also appreciated. Being able to have the ability to listen to music, watch videos, and download games without the need of an opened Internet browser is just what every Internet lover needs.

Author Box
The post is contributed by William Taylor. William has expertise in web designing, cloud computing and Linux applications. He is a tech geek who likes collecting expensive gadgets.  Visit his site for adsl internet and digital tv.