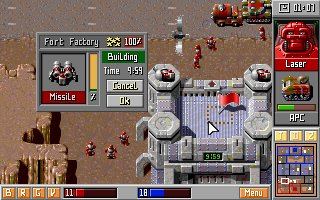 Today we’ll take a look at a remake of the classic game Z. Z was a real strategy pc game by Bitmap Brothers launched in 1996. It is about two armies of robots (red and blue) battling to conquer different planets.

The remake it’s Zod Engine is an open source remake written in C++ using the SDL library and available for Linux/ e Windows.

The Zod Engine is a multiplayer oriented game where as Z is a single player oriented game. Here you will be able to for the first time do things such as play games against multiple bot players, or play the original levels with friends helping you on the same team.

Zod it’s available on the official page as source on a .tar.gz file

Now you can install Zod with these commands:

The Zod Engine is a MMORTS / RTS style game. In the game you command an army of robots and vehicles to take over neighboring territories in the ultimate goal of destroying all of your enemies. Unlike traditional RTS (Real Time Strategy) games the Zod Engine does not create units from collected resources but instead construction is constant from preset factories scattered throughout the level.

There are many regions and structures inside a map, you can capture a region by moving soldiers to their flags, once inside the region your unit must stay there for a definite amount of time to capture it.

The more regions are in player’s control, the less time is required to the development of units. Powerful units need more time to be developed. The main purpose of the game is to eliminate the enemy by conquering their command fort. It can be done by two ways: by sending units into the fort or by destroying the fort. You can also win the game by destroying all the enemy units. 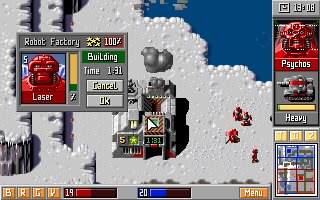 In the beginning of a mission, both sides gets control of their fort and a group of unit. There are turrets and vehicles spread into the map and you can send robot to capture and include them into your army. The robots will stay in a captured vehicle or turret as gunner or pilot.

This game is slightly different from other strategy games. For example, the driver of a vehicle can get damage from enemy fire, if the driver is killed, the vehicle he was commanding will be set free and will be available to both sides, the first to move a robot inside the vehicle will use it.

Also different robots behave differently. Units like sniper that have an higher intelligence level are less likely to be destroyed by a tank because they are expected to take cover and avoid shots.

The game start with easy and symmetric levels where the CPU begins with almost the same resources as the player begins. As the game progress, the levels of the game turn out to be more difficult than the starting levels. It needs much more skillfulness and great efforts to manage efficiently all the units and the CPU will get more beginning units than the player.

For example, the fort of the CPU will get more defensive turrets.