Gnome 3 has failed to win users over. Unity was so unpopular it wiped out Ubuntu’s lead on Distrowatch and made Linux Mint number one. With the dominant desktop (Gnome) and the dominant distribution (Ubuntu) both failing to set users’ hearts racing we’re reminded once again why we love using Linux – there’s so much choice.

There might even be too much choice. From Fluxbox to XFCE and KDE to MATE there are a vast and confusing selection of desktop environments to work through. Whilst some have looked to move to a lightweight option like XFCE that captures much of the flavour of Linux past with some funky new features (the nice see-through dock at the bottom of the screen on Xubuntu looks really sharp for example) others are looking to the future. In Cinnamon we have a very exciting, beautiful future that you’ll soon be recommending to everyone who’ll listen.

If you’re looking to install from within Mint it’s relatively easy and you’ll find the Cinnamon packages in the repositories. If you’re installing from any other distribution (Xubuntu, Fedora etc) you’ll need to hop on over to the official site and follow the instructions: http://cinnamon.linuxmint.com/?page_id=61

The first thing to remember is that a desktop environment is not the same as an operating system. When you install and try out Cinnamon there’s no need to dual boot, format or lose any of your settings. When you log in you’ll simply have an option to log into Cinnamon instead of your usual session (Xubuntu Session for example). You’ll be up and running as you were before except in a beautiful fully functional environment that very much represents the past and future of Linux with style and class. 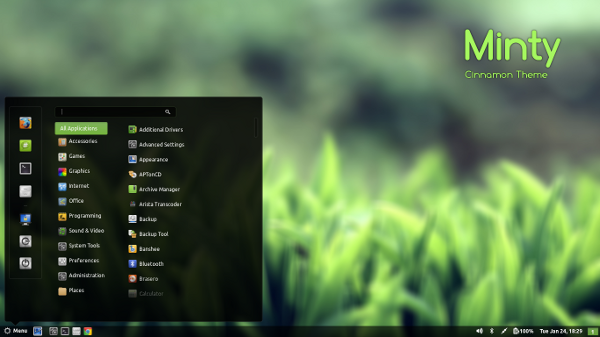 Beautiful, Modern And Yet Traditional - The Cinnamon Desktop

Productivity First, But No Compromises On Beauty

The first thing users will notice is the way a traditional desktop has been restored – no more Gnome Shell overlay forcing you to slide to the top left endlessly to switch applications or a Unity style left sidebar. This reproduction of the functionality will generally result in higher productivity as users have learned over time where a ‘Menu’ should be placed (bottom left) and how to switch between applications – instinctively looking to the bottom of the screen to switch.

Linux Mint has long been one of the most attractive distributions. They have tirelessly worked to ensure fonts, menus, headers and effects combine well to give a modern feel to Cinnamon. All the effects that you’re used to from Gnome 3 are present. Overall in moving away from the way of working Gnome 3 and Unity were trying to force on users the developers haven’t lost any of the significant step forward Gnome 3 made in appearance when compared to the rather dated feel of Gnome 2. This blend of old and new will be extremely popular with both the traditionalists and those who felt Gnome needed a significant refresh.

Many slower PCs were unable to fully enjoy Gnome 3. Tested on a seven year old test box that had previously run Linux Mint 11 beautifully, our results showed a significant deterioration when moving to Mint 12 (Gnome 3). Both memory usage at idle and the load times for all of our favourite apps had deteriorated – sometimes by as much as 30%. With Cinnamon, Clem and his team of developers have restored that speed.

Honestly when we first booted up our old test box in Xubuntu, and followed the simple instructions to get Cinnamon and rebooted we were braced for some Gnome 3 style lag. We were absolutely blown away – not only did Cinnamon look sharp as a knife but all the window effects users have come to love in modern desktops were in full force. The menu appeared instantly – we’d had to wait up to three seconds for first load of the menu in Mint 12 and sometimes four or five seconds to use the Gnome 3 overlay to select a window. This is another tick in the box for Cinnamon. It has moved the desktop experience forward but retained not just a classic look and functionality but also managed to retain the speed and the ability to restore an old PC to a beautiful workstation. That ability was sadly lost to some extent in Gnome 3 so this marks a significant step forward.

Time To Take Her For A Spin

Despite being in the relatively early stages of development the team at Cinnamon have done a fantastic job. It’s light, beautiful and easy to use – just like your favourite Linux desktops of the past. Looking to the future it supports and is compatible with the latest versions of Ubuntu, Mint and many modern distributions and can fly with all the new, stylish effects we are falling in love with as we look forward to the Linux to come.

—–
Author Box:
Carrie Willis is a full time writer and researcher who lives in London. She has worked with all manner of companies including promoting a bank’s latest credit cards, writing advertorials for a pet food company and many guest blogs. Her personal interests include dabbling in web design.

6 Responses to “Cinnamon: A New Delicious Flavour For Linux Users To Enjoy”