OpenELEC is an embedded operating system built specifically to run XBMC, the open source entertainment media hub. The idea behind OpenELEC is to allow people to use their Home Theatre PC (HTPC) like any other device you might have attached to your TV, like a DVD player or Sky box.

But before continuing with OpenELEC i do a step back and say a few words about XBMC.
Xbox Media Center (XBMC) is an open source program created for the Xbox and now available on xbmc.org for Mac, Windows, Linux, Android, Apple TV and Xbox. On all platforms other than Xbox, XBMC acts as an application, possibly launched at boot time or later.

XBMC can play most formats of audio/video, and if there is an internet connection it’s able to use network services, such as getting movie and album reviews, or view movies in streaming.

OpenELEC it’s something different (better ?) if you just want a HTPC, instead of having to manage a full operating system, configure it and install the packages required to turn it into a hybrid media center, OpenELEC is designed to be simple to install, manage and use, making it more like running a set-top box than a full-blown computer.

OpenELEC is released in different builds, each one streamlined to a particular platform – including only the drivers required for that hardware. For this reason, it’s important to choose the build that matches your hardware the closest, check the available builds on this official page

The first step for an installation it’s to create a bootable USB stick, the official documentation is well done, and there is an how to create it with Linux and windows.

As a second step insert the USB on the computer or device you want to devote to OpenELEC and start the system, booting from USB, you’ll see something like this: 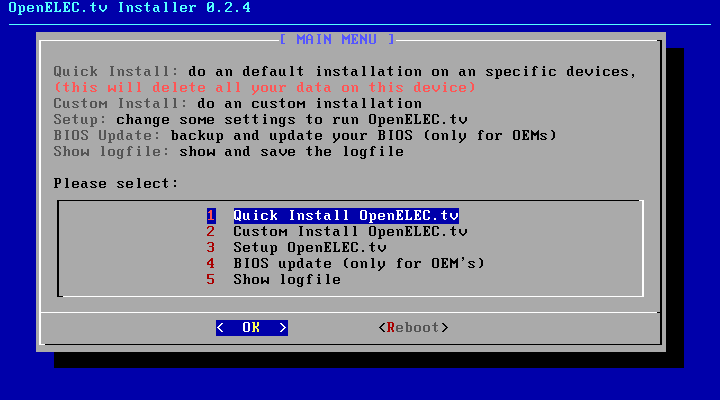 Make a quick install, so just hit enter to get to the next screen. The next screen shows the locations where it’s possible to install OpenELEC to. In this example the machine is going to boot from a 2G USB stick, and there’s no other disks in the machine.

If you’ve got more than one disk, make sure you select the right one as the installer will wipe the disk. 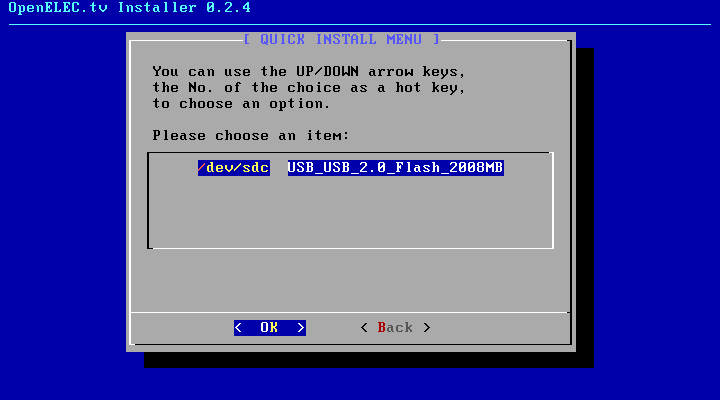 Press OK to select the disk, this will start the installation. 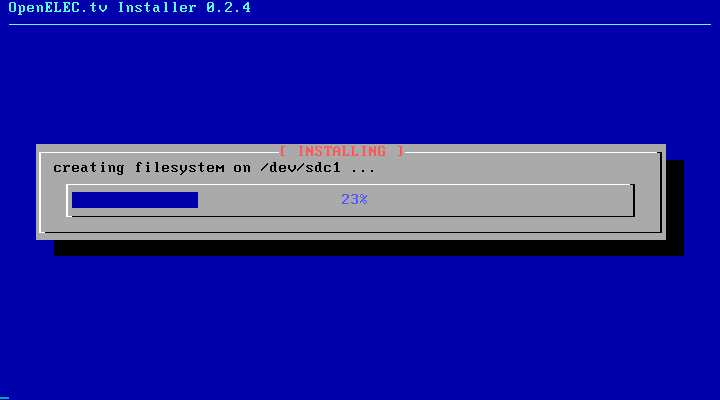 Once it’s finished, the installer will take you back to the main menu. We don’t need anything else here, so use the right cursor to select ‘Reboot’ and hit enter.

This is basically XBMC with a super fast boot, so you have access to all XBMC features, play a movie or a music album from your library, view a streaming from youtube or check for the local weather.
The easier thing to do is to check this good introductory video

XBMC-Live is distributed by the XBMC-Team. It’s based on Ubuntu, which means that it comes with all the Ubuntu software. In essence, you’re running a full Ubuntu install, but without a display manager. Since Ubuntu strives to support many hardware platforms, it has to include drivers and firmware for many systems, making it slow to boot.

XBMCfreak is based on XBMC-Live, but features some patches and enhancements not found in XBMC-Live as they’re either waiting to be included or not yet ready for full release. It may also be based on a newer version of Ubuntu than XBMC-Live. While that makes it more up-to-date than XBMC-Live, it also makes it slightly less stable.

OpenELEC isn’t based on Ubuntu – in fact, it’s not based on any distribution. Instead, OpenELEC has been built from scratch specifically to act as a media center. This means it can be streamlined to certain hardware and only needs to include the packages absolutely required, making OpenELEC as streamlined as possible. In addition, OpenELEC is designed to be managed as an appliance – it can automatically update itself, is managed almost entirely from within XBMC and boots in seconds.

2 Responses to “OpenELEC, a media center based on XBMC”