I think that sudo is become a wide used command with Ubuntu, where you don’t even have a root password, before that probably it was used only in some data-centers to restrict access to some commands.

sudo allows a permitted user to execute a command as the superuser or another user, as specified in the sudoers file.

In this article I will show some uses a little less common for this command, for a general description of the command you could read the page about sudo on wikipedia

Obviously this could be used also as

if you give another command after the one you want to run as root, but take care on which command are you running as root.

you can use this command to have an interactive shell as root.
To have a shell with a different user use the format

sudo -u username -i

The -i (simulate initial login) option runs the shell specified in the passwd entry of the target user as a login shell. This means that login-specific resource files such as .profile or .login will be read by the shell. If a command is specified, it is passed to the shell for execution. Otherwise, an interactive shell is executed.

3) Sudo output redirection, thanks to petur.eu:

We are faced with a problem when trying to redirect with sudo, as the second part of the command is not executed with root privileges.

The solution is to use;

This command can be used in your vi/vim to save a file you have opened and edited as a user, but you can not save with your user rights. In this way you don’t have to save the file in /tmp, become root and move the file from /tmp to the real place. 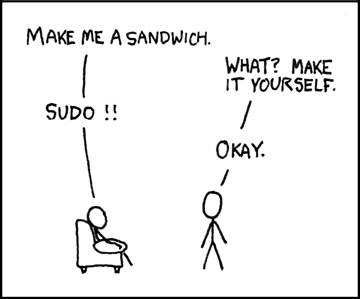